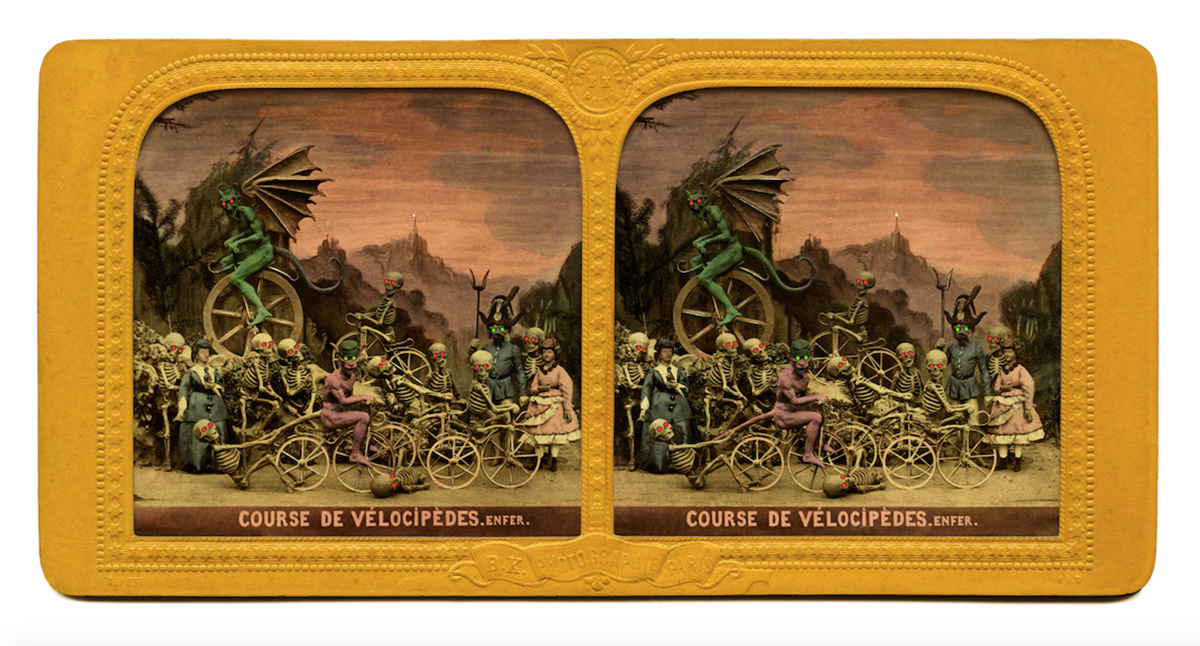 Brian May, Denis Pellerin and Paula Fleming proudly present their Diableries exhibition; a devilment of colourful and infernally detailed three-dimensional images of the underworld, originating from the 19th century.

For one day only, Soho’s Century Club will be transformed into a gothic Victorian crypt of temptation and seduction. Whilst surrounded by fantastic imagery depicting demonic scenes with carousing skeletons, devils and satyrs, you will have the opportunity to see the Diableries stories come to life in 3-D using Brian May’s stereoscopic viewer which he designed in the shape of an Owl and named just that.

Brian, who holds an extensive collection of stereo cards, will display a selection of original Diableries cards along with some of his most treasured stereoscopes and 3-D cameras from the Victorian days, providing a fascinating insight into stereoscopy.

There will also be a 3-D screening of the spellbinding Diableries film, One Night in Hell, which Esquire says is “the best film you will see all Halloween”, and features an unforgettable scene with Satan swooping down on a skeleton protagonist playing a skull guitar, accompanied by his peers on trumpet and drums, to a soundtrack of We Will Rock You morphed into Tchaikovsky’s 1812 Overture. The very skull guitar from Queen’s It’s A Hard Life video, that inspired this, will also be on exhibit for the public to see for the first time as part of the stereoscopic adventure in hell.

The exhibition celebrates the launch of the trio’s book

Diableries: Stereoscopic Adventures in Hell – The Complete Edition, published by The London Stereoscopic Company
Signed copies will be available for purchase at the exhibit.

“Denis Pellerin, Paula Fleming and I have been on a world-wide quest for the last 30 years, to unearth every one of the 182 Diableries cards ever made.  When we published the first edition of our book – Diableries: Stereoscopic Adventures in Hell –  we were still just two short.  Now the set is finally complete, and in this new Diableries exhibit, we’ll be sharing the entire series of these devilish enchantments for the very first time since 1860. These 3-D Adventures in Hell from Victorian times are as astounding as ever, and we’re proud to give them a new lease of life in the 21st century.  The exhibition opens the week of Halloween!

The exhibit will also include some original stereoscopes and cards from the 1850s onwards; we’ll be showing you how these incredible stereoscopic masterpieces were created, and how they can be brought to life in 3-D today, as crisp and hot as when they first set the public on fire in 1861.” 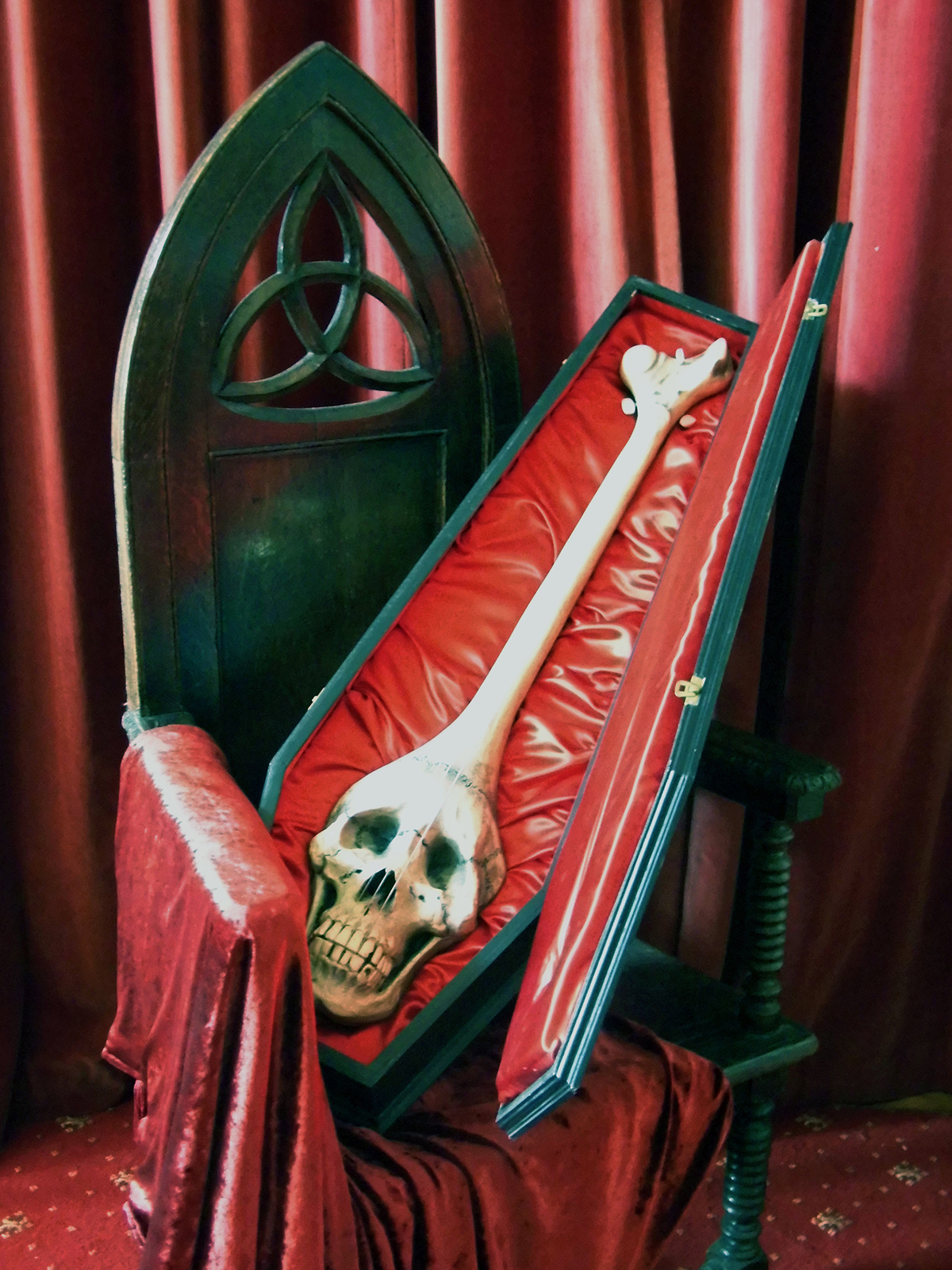 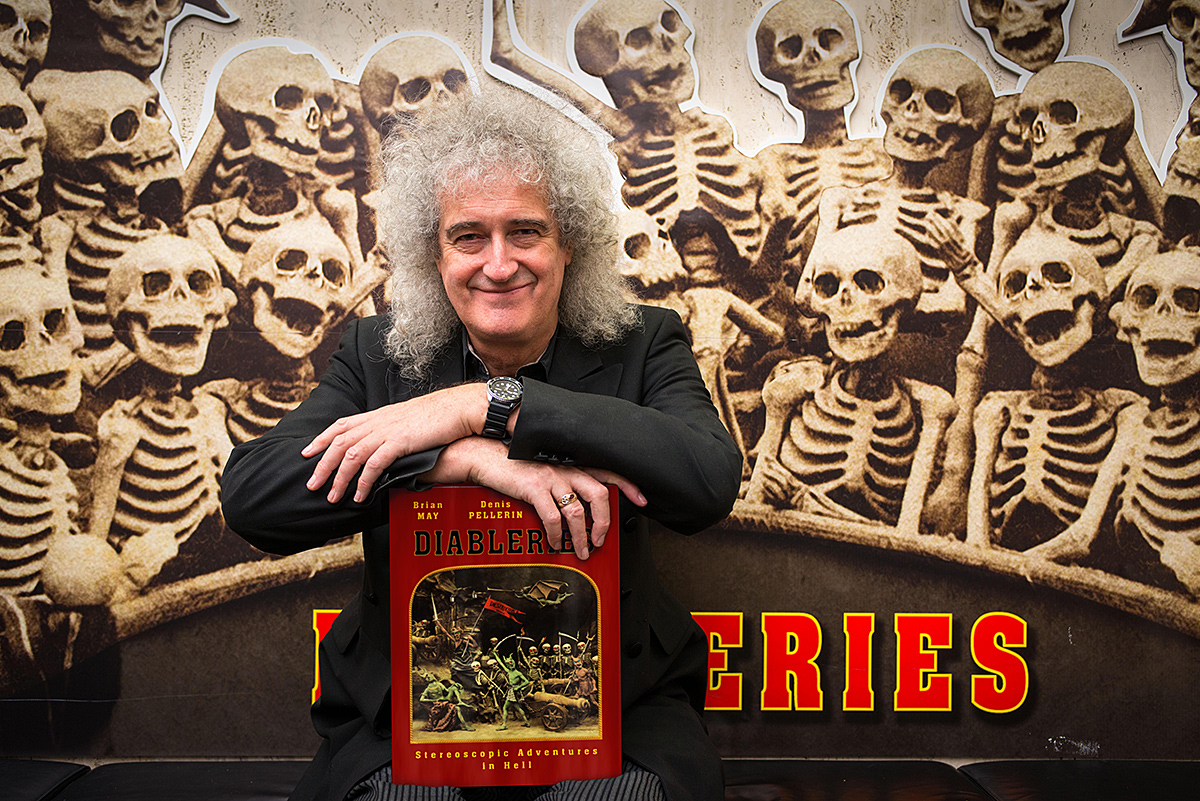 THE COMPLETE EDITION OF THE CRITICALLY ACCLAIMED DEVILISH STEREOSCOPIC MASTERPIECE

“It has been a labour of love for us all, and has taken us to places we never dreamed of. We hope, in these pages, to share this voyage of discovery with the world.”Brian May

“Colourful and infernally detailed three-dimensional images that provide fascinating insight into the imagination of the past…The black-clad volume is alive with tableaux that range from the grotesque to the ghoulish, from the cruelly satirical to the plainly insane. Every picture tells several stories.”Daily Telegraph

An Englishman (Brian May), a Frenchman (Denis Pellerin) and an American (Paula Fleming) were united by a rare passion for collecting Victorian cards known as Diableries (translates as “Devilments”) and in their quest to resolve the many mysteries of the satanic imagery they compiled the first Diableries book, published to critical acclaim in 2013. Between the three of them they had located and reproduced 180 of the known 182 Diableries.

Six years later, through sheer persistence and a worldwide search the trio made the thrilling discovery of the two remaining stereo cards and shall unveil the fantastic imagery and the story behind them for the first time in a lavish new edition of Diableries.

What is a Diablerie?

A Diablerie is a unique stereo card with demonic scenes of the underworld, designed for stereoscopic viewers in Paris in the mid 19thcentury. A stereo card is a 3-D view printed on paper – they were first sold to the public in England and France around 1853, becoming hugely popular throughout the mid to late 1850s.

Between them Brian, Denis and Paula have now discovered all 182 of the Diableries cards in existence and have brought them to the 21st century to be viewed through a modern day stereoscope, designed by Brian May, that he named an Owl. The three authors present the world with their extraordinary full set of Diablerie stereo cards (originally published from the 1860s to the 1890s) which they have collected and studied over the years. By looking through the stereoscope, supplied with the book, you will be transported to an underworld of devils, satyrs and skeletons, rich in imagery and storytelling.

The three authors explore the magic of stereo photography and the story behind the image on each card is interpreted. Never before had these secrets been revealed – for instance, clues to the conflicts in France in a period of great unrest, suffering, shame and suppression – a period which, even in French schools, is seldom part of the curriculum. The Diableries are impudent, funny, sad, riotously inventive, satirical and dangerously seditious. Their wickedness awaits you in time for Halloween!

BRIAN MAY’S OWL: Brian has created the definitive high-quality modern-day stereoscope; reminiscent of an Owl, he named it just that. Every book the LSC publishes comes with an Owl, and the illustrations in the book, are produced by the highest resolution printing technology available will, through this device, delight you all just as they did in Victorian times.