“Devilishly happy that our demonic short film One Night in Hell is to feature at Universal Studios – generating a new kind of Halloween Havoc !! It Rocks !!!  It jives !  It’ll rattle yer bones!” Brian May 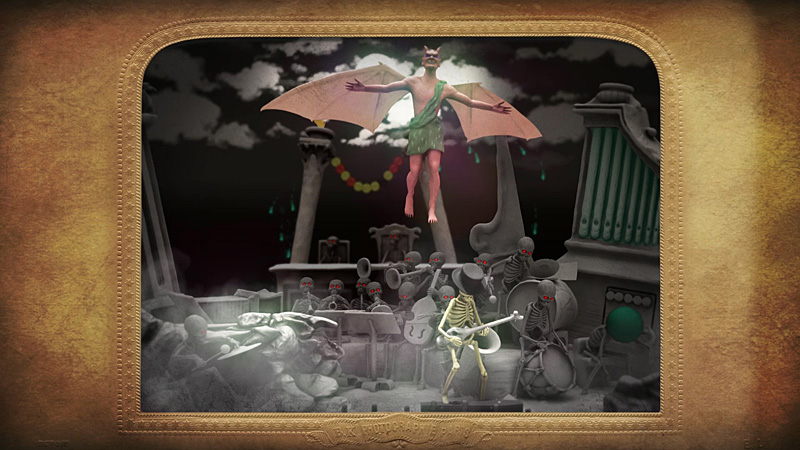 The short film, produced by Unanico Group and Duck Productions in association with The London Stereoscopic Company, features an original soundtrack by Brian May, has launched at over 20 film festivals worldwide, was given five stars in the British press, proclaimed by Esquire to be the “best film you’ll see all Halloween,” and hit the number one spot for short films on iTunes.

With the heritage of making horror films for over 80 years, Universal Studios Hollywood brings you the most terrifying live Halloween event in Los Angeles!
Halloween Horror Nights 2015 offers a haunting new slate of nightmares featuring the most authentic scares from some of the biggest horror properties in film and TV.

One Night In Hell is set to be a main attraction at the event, which runs from 18th September until 1 November. http://www.halloweenhorrornights.com/hollywood/2015/overview.php

A 3D phenomenon of 1860s Paris will be unleashed on 21st century Hollywood. In association with The London Stereoscopic Company, One Night in Hell is a devilish and

spectacular animation short that tells the story of one skeleton’s journey into a stereoscopic Hell.

Using an innovative combination of CGI, 2D and stop motion animation, the film brings to life, for the first time, the Diableries stereo cards that have fascinated devotees for over 150 years and inspired the earliest film-makers, including Georges Méliès. Adapted from the book, “Diableries: Stereoscopic Adventures in Hell” by Brian May, Denis Pellerin and Paula Fleming, the film is a satanic 6 minutes and 66 seconds long, styled after the traditional Diableries stereo cards from 19th century France.

One Night in Hell is directed by Jason Jameson and James Hall and the soundtrack features new music composed by Brian May. The film’s sound has been mixed in state-of-the-art Dolby Atmos sound providing the utmost clarity, richness and detail in selected cinemas. The music arranged and produced by Brian May was recorded with the Czech National Symphony Orchestra in Prague. The film’s climax is a demonic concert, in which Satan is the conductor and the skeleton is the lead guitarist, as Queen’s “We Will Rock You” combines with Tchaikovsky’s 1812 Overture in a way that it has never been played before.

“It has been an incredible pleasure working with Brian May on “One Night in Hell”. A skilled team of 3D and 2D animators, graphic artists and sound designers in our London studio have done an amazing job bringing the Diableries characters to life, and Brian’s score really shines.”
Paul Laikin, Producer at Unanico Group