You are here: Home / News / DIABLERIES ARE COMING HOME !! 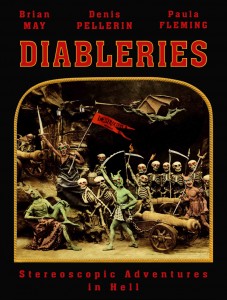 Dr. Brian May, Denis Pellerin and Paula Fleming are bringing the Diableries back to their mother country at the end of November.

Following the success in Britain and in the States of their book, Diableries : Stereoscopic Adventures in Hell, the three authors, with their new French publisher, Les Editions La Martinière, will present the book in its version française to the Press on November 25 at the Hotel de Sully, in Paris.

The venue was not chosen at random. It’s the very building where the only known set of original negatives for these devilish 19th century stereo cards was recently re-discovered, having spent many years locked in a cellar, forgotten by the World. Diableries, it must be remembered, are 100% French, and were already described as such in the only article ever written about them, when they were exhibited in a shop window in Oxford street in August 1860 !

Pellerin, May and Fleming spent 3 decades collecting these rare Diableries stereocards and pieces of information about them. The mysterious and fascinating tableaux depict in glorious 3-D life in Hell (bearing a striking resemblance to life in Paris during and after the reign of Emperor Napoleon III). The scenes are bursting with demons, skeletons, pretty women and, of course, M. Satan himself. In all, there are seven series of Diableries, produced between 1859 and the mid 1890s, all reproduced in the book. The earliest series, completely assembled by 1874, is mostly the work of two wildly imaginative and skilful sculptors, Adolphe Hennetier, and Louis Habert.

These wonderful dioramas, were made specifically to be photographed for the stereoscope, the “optical wonder” of the Victorian era.  The marvellously detailed clay figures which populate them survive today only in their photographic avatars. To our knowledge, not the smallest fragment of the original models has ever been found in modern times. This is perhaps not so surprising, since cracks in the figures were already visible at the time they were photographed ; also, while some of the later characters benefit from being reused in successive views, the dioramas themselves must have been ripped apart after the stereo photographs were taken, to make space for the next creation, and supply pieces of ‘scenery’ for it.

It is with excitement and awe that the three authors will remind the French of this piece of their national heritage which, though hugely popular and quite seditious in its time, was only known until lately to a few collectors. Until M.Pellerin began his researches into the dark corners of the French 1860s, no-one among those fascinated by the images had any clue as to the secrets concealed in the pictures – the stories they were really telling.

The French version of the book Diableries has been updated to include a new discovery – a card titled Correspondance de Satan, one of the two cards reported missing in the English edition – which surfaced only a few months ago. This edition also features some new ultra-high quality images fully restored over several months by Dr. May from the newly found negatives themselves.

Among the guests at the Hotel de Sully on November 25th will be descendants of Diableries sculptor Habert, along with the curator of the cemetery where the remains of the other sculptor, Hennetier, are buried. Thanks to M. Pellerin’s researches and the Diableries book finally bringing recognition to Hennetier’s genius, his bones are no longer under threat of being disturbed.

A 6.66 minute animated 3-D movie, made in London by Unanico Animation Studio, based on 8 of the 72 scenes from the earliest Diableries series, will be projected in its French version for the first time at the Press launch.  Titled “One Night in Hell,” it follows the adventures of a top-hatted skeleton carrying an oddly-shaped piece of luggage, on his way to a mysterious destination. The soundtrack is a based on Tchaikowsky’s 1812 Overture and the Queen classic We Will Rock You, performed by the Prague Symphony Orchestra and Brian May himself on his iconic Red Special Guitar. Brian, Denis and Paula would like to thank the Stéréo-Club Français and their president, Pierre Meindre, for their support and for helping us setting up the projection.

The authors are thrilled to be bringing this 19th century French phenomenon back to a new audience in its home country, and hope this new edition of the book will be as successful in its French incarnation as it has been in English.  They also hope that it will open a door for French people to rediscover a rich part of their history which, mainly for political reasons, has not been taught in schools for decades, and is virtually unknown to the present-day French public.

Diableries – a whole universe of French Devilments, is back !