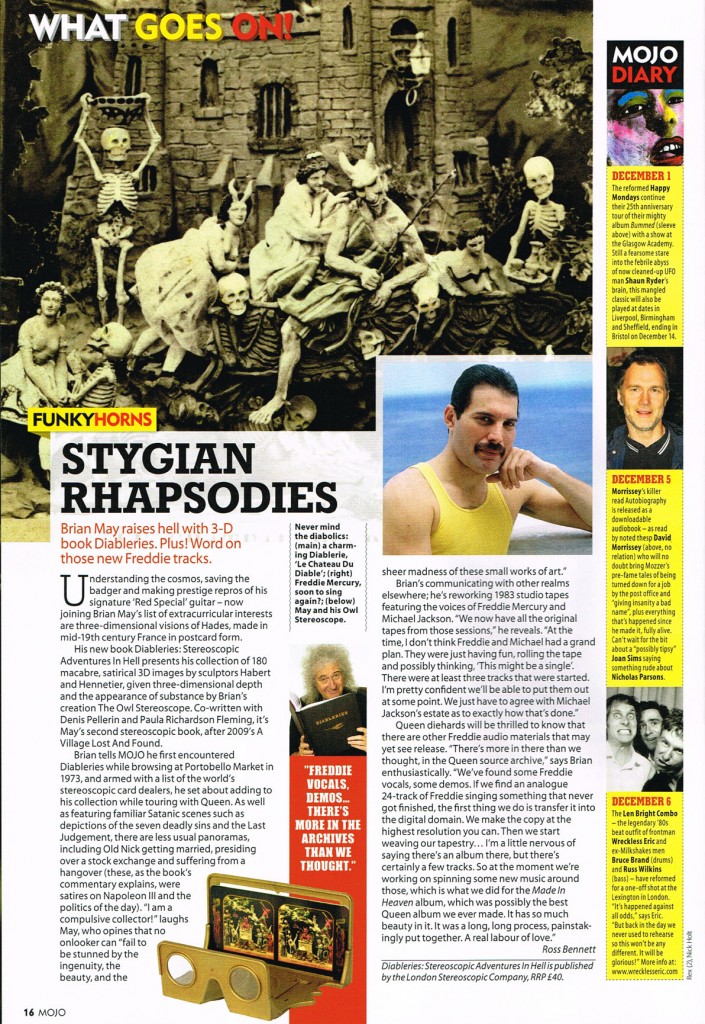 Brian May raises hell with 3-D book Diableries Plus! Word on those new Freddie tracks

His new book Diableries: Stereoscopic Adventures In Hell presents his collection of 180 macabre, satirical 3D images by sculptors Habert and Hennetier, given three-dimensional depth and the appearance of substance by Brian’s creation The Owl Stereoscope. Co-written with Denis Pellerin and Paula Richardson Fleming, it’s May’s second stereoscopic book, after 2009’s A Village Lost And Found.

Brian tells MOJO he first encountered Diableries while browsing at Portobello Market in 1973, and armed with a list of the world’s stereoscopic card dealers, he set about adding to his collection while touring with Queen. As well as featuring familiar Satanic scenes such as depictions of the seven deadly sins and the Last Judgement, there are less usual panoramas, including Old Nick getting married, presiding over a stock exchange and suffering from a hangover (these, as the book’s commentary explains, were satires on Napoleon !!! and the politics of the day! “I am a compulsive collector!” laughs May, who opines that no onlooker can “fail to be stunned by the ingenuity, the beauty, and the sheer madness of these small works of art.”

Brian’s communicating with other realms elsewhere; he’s reworking 1983 studio tapes featuring the voices of Freddie Mercury and Michael jackson. “We now have all the original tapes from those sessions,” he reveals. “At the time, I don’t think Freddie and Michael had a grand plan. They were just having fun, rolling the tape and possibly thinking, ‘This might be a single’. There were at least three tracks that were started, I’m pretty confident we’ll be able to put theme out at some point. We just have to agree with Michael Jackson’s estate as to exactly how that’s done.”

Queen diehards will be thrilled to know that there are other Freddie audio materials that may yet see release. “There’s more in there than we thought, in the Queen source archive,” says Brian enthusiastically. “We’ve found some Freddie vocals, some demos. If we find an analogue 24-track of Freddie singing something that never got finished, the first thing we do is transfer it into the digital domain. We make a copy at the highest resolution that you can. Then we start weaving our tapestry … I’m a little nervous of saying there’s an album there, but there’s certainly a few tracks. So at the moment we’re working on spinning some new music around those, which is what we did for the Made In Heaven album, which was possibly the best Queen album we ever made. It has so much beauty in it. It was a long, long process, painstakingly put together. A real labour of love.”