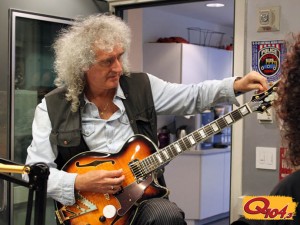 Today Brian did quite a number of radio interviews including a major one hour interview at Q1043 classic rock station, to promote the diableries book signings

Legendary Queen guitarist Brian May stopped by the “Jim Kerr Rock & Roll Morning Show” Friday morning and gave a great interview and impromptu guitar performance for listeners. May discussed a number of topics including the possibility of a new Queen album, his new book “Diableries: Stereoscopic Adventures in Hell,” the Freddie Mercury movie, and much more!

May confirmed that he is working on a new album of old Queen recordings. “There is more than I thought there…there’s those couple of tracks we’ve been telling people about with Michael Jackson…a mixture of old and new I think,” May explained. “I’m working on one particular track which nobody’s going to expect that’s just Freddie singing a beautiful song.“

May also talked about the Freddie Mercury movie and revealed that the band has an unknown actor in mind for the part. “We have somebody very much in mind, who is not quite signed on the dotted line yet, but yeah he’s a young and upcoming and wonderful actor and a face you probably don’t know, but you will soon.”

While in studio May also pulled a guitar off the wall in the Q1043 studios and started playing for everyone! As May said, “I just like guitars in the morning.”

Watch the interview below.